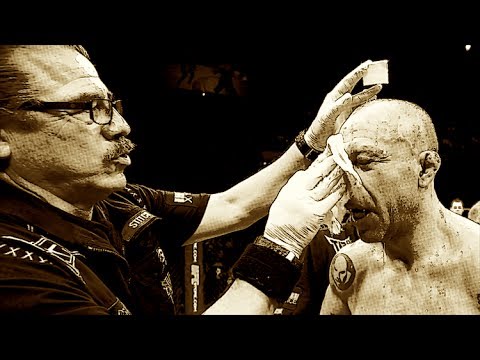 Jacob “Stitch” Duran is the most famous UFC and Boxing Cutman in the business. Since 2002 he has been wrapping hands and closing cuts in the UFC Octagon and I personally can’t remember an event without him. In boxing the Klitschko Brothers always fly him to Europe to work their corners and Sylvester Stallone puts him in movies. He’s more likely to be recognised on the street than most fighters.

Sounds like a pretty simple gig right? Not really. Stitch is a psychologist, doctor, and coach all rolled up into one. He has 55 seconds between rounds to stop the bleeding, apply the cold and pressure, calm the fighter, and give confidence with his presence. All of this is done with one goal in mind: to give that fighter “One More Round.”

Born into a migrant camp in California, he was working in the fields at 5 years of age. From there he enlisted in the Air Force and went to Thailand where he would fall in love with kickboxing before returning home to America to start his own school.

Later when most people would be comfortable with a company car and job as a sales rep for RJ Reynolds Tobacco, he packed it in and moved to Las Vegas to pursue his dream of being a Cutman.

The rest is history and Stitch is one of a kind. As I sat there talking to him I thought to myself, “They just don’t make guys like this anymore. He’s an American original.” From the pressed shirt to that boss-player moustache, he’s the coolest Uncle you never had, and the sweetest guy who could drop you in one shot.

At 62 years of age Stitch is doing what he loves with no plans of slowing down. “Man, I’m going to die in the ring.”